The body we are born in does not determine a person’s gender identity. Not everyone fits into the two known categories, male or female. There are many combinations, physical traits, genetics, a person’s own sense of their gender identity and gender expression, which give rise to different possibilities.

Gender identity, sexual orientation or gender expression are not always linked to our sex assigned at birth.

Our gender identity refers to knowing whether we are male, female, both or neither (non-binary trans identities).

Sexual orientation is the romantic or sexual attraction we feel towards other people.

There are children/adolescents who identify with a different gender to the one assigned at birth, ask to be addressed by a different name to the one they were born with, who want to dress and do their hair according to the gender they identify with (trans boys and girls). There are others who simply have behaviours (gender expression) that break with the mental schema we still have about how a boy or a girl should play, behave or dress. Non-binary trans identities are highly varied and they often feel more comfortable referring to themselves as they/them, using a neutral gender.

Whatever the case, what is important is that your child’s gender identity or gender expression is respected. Respect is nothing more than loving them as they are and accompanying them in this process called transition, a path that, depending on each person’s needs, will take one form or another.

Transition is known as the path that these children take in order to be recognised by their families and society, from the gender they were assigned at birth to their own. In most cases, the transition is made by the families and the closest environment, among other things, to adapt to using the name with which they identify. The emotional response will depend on many factors, including education, values and beliefs, as well as on the expectations that families have of them. 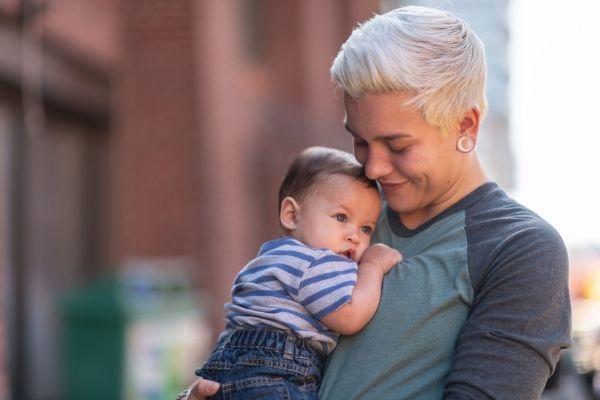 Whatever the needs regarding the way forward, the only valid option is respect for what each individual and family need.

Depending on age, personal circumstances and environment, needs will be different.

Non-binary trans identities and trans children in childhood require only unconditional love and support from their families, environment and school.

All this falls within what we could understand as normality.